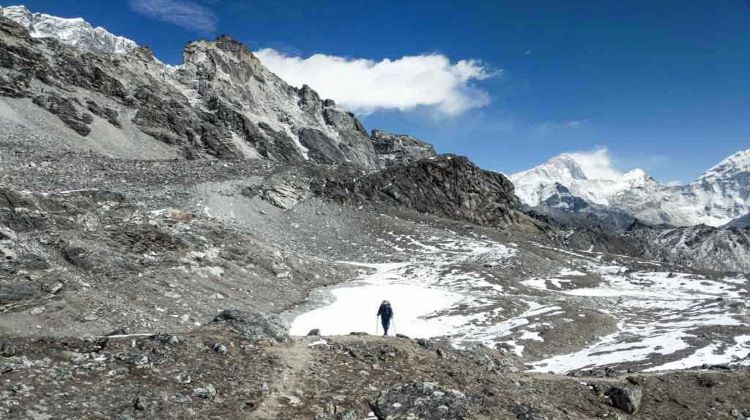 Kongma La Pass is a trekking destination among the “Three Passes Trek” of the Everest region. It is known to be the toughest of the three passes treks. Kongma La pass is also one of the most beautiful and spectacular places among the three passes.

The Kongma La pass lies at an elevation of 5540 meters. It is located directly over Dingboche. The highest mountain in the world, Mount Everest, is southwest of it. Trekking up the Kongma La pass provides a fantastic view of the Everest region, including Mt. Everest, Nuptse, Lhotse, and many others.

You can see numerous peaks, including Mt. Thamserku, Mt. Amadablam, Mt. Kongtega, and others, from the pass. Additionally, there are multiple glacial lakes within a few kilometers of your standing. When you trek this region, you will have the opportunity to experience the natural and cultural splendor of the Khumbu/Everest region.

Numerous Sherpa villages live in the trails along the trek. Dingboche, one of the nearby locations, is a charming Buddhist settlement. You have the chance to learn about their culture as a result. You could include a hike up to Kala Pattar in this trek. You have an unmatched view of Mount Everest from this point.

How to get to the Kongma La Pass

First, you must board a short flight from Kathmandu to Lukla. The flight will mark the start of your journey to the Kongma La pass. You then have to take the traditional Everest trekking route from Lukla. This involves traveling through well-known locations like Namche Bazaar, the entrance to the Everest region. Tengboche and Dingboche villages are on your road to the Kongma La pass. Before crossing the Kongma La pass, people usually acclimatize in Dingboche.

You pass through the blooming rhododendron forest, river valleys, and villages. You get to enjoy the natural scenery, Mountain View, and culture of the people. From the pass, you will be overwhelmed with the dramatic view of many mountains. Some of them include the Ama Dablam, Makalu, the Lhotse, and the Nuptse face.

After you cross the Kongma la pass, you can also trek to the Everest base camp. It allows a great experience of the Everest region.

The permits you need for Kongma La Pass are the essential permits required for the Everest region trek. They are the Sagarmatha National Park permit and the Khumbu Pasang Lhamu Rural Municipality Entrance Permit.

The Sagarmatha National Park permit is for the protected area of the region. The part houses many rare species.

The Khumbu Pasang Lhamu Rural Municipality Entrance Permit is a regional fee for the Solukhumbu region. Both permits are imposed to uplift the region’s economy and further tourism.

But sometimes, such sicknesses are unprecedented. If they occur anyhow, there are majors to mitigate their dangers.

You will have a support system on the trek if you travel with guides. Having porters to help with your luggage also helps. The mitigation of symptoms will be pretty straightforward. Also, if altitude sickness triggers other dangerous conditions, you can call for a helicopter rescue.

The scary trails and glaciers

Crossing the Kongma La pass requires a trek through steep and uneven landforms. Sometimes these already challenging trails have snowfall and rain. They cause the courses to be slippery and dangerous. It results in accidents and could be life-threatening.

The region also houses many glaciers that you have to pass. Passing the Khumbu glacier is one of the most daring parts of the trek. These dangers are easily tackled by trekkers, though. Most trekkers prevent dangers on the roads by better planning. They avoid snow storms and slippery roads by trekking during autumn and spring. Winter and monsoon could destroy suitable walking trails.

Trekkers also plan to pass the glacier. There are spots of landmarks to know the safe sites on the glacier. The dangers of the glacier are usually crevasses opening. This can again be prevented by planning. Sticking to the weather forecast is the best idea for it.