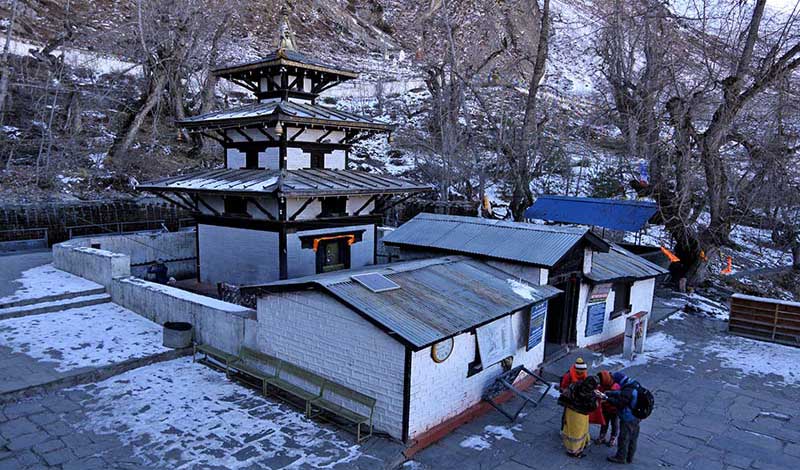 Muktinath, home to the Hindu deity Lord Shiva is a holy shrine that lies in the western provinces of Nepal. The word comes from a combination of ‘Mukti’ meaning salvation and ‘Nath’ meaning the master. Devotees usually visit the temple of Muktinath to attain absolute salvation and nirvana. Aside from Hindus, Buddhists also consider the temple as a sacred site and refer it to as Chumig Gyatsa, which in Tibetan means “Hundred Waters”.

Situated at around 3800m, the temple is one of the highest temples in the world and features some magnificent views of the Annapurna Massif. Likewise, the temple also features the well-known 108 showers which locals believe can wash one of all their sins and wrongdoing in the past.

The Muktinath temple lies in the Muktinath valley situated in the Mustang district of Nepal. It lies about 18kms northeast from Jomsom and 374 kms west from the capital. It sits at 3800m at the foot of the Thorung La Pass, surrounded by the giant Annapurna massif in the distance. It also features in the route of the well-famed Annapurna Circuit Trek.

According to Hindu mythology, people believe Lord Vishnu attained salvation from the curse of Brinda here contributing to its religious significance. Many Hindu devotees also consider Muktinath as one of the eight most holy places in the world. The seven others are Srirangam, Srimushnam, Tirupati, Naimisharanya, Thotadri, Pushkar and Badrinath.

Furthermore, the temple also features a Pagoda style design dedicated to Lord Vishnu. The design also denotes that Muktinath is one of the 108 Vaishnava shrines. The holy water that flows in the well-known 108 pipes around the temple also indicates the sacred Pushkarini waters. Here, the devotees take a dip which they believe washes of all their sins and wrongdoings in the past.

The Buddhist mythology explains the history a little differently. Buddhism believes that the Muktinath or so-called Chumig Gyatsa is the home of 21 Taras, female deities, and the habitation of numerous Dakinis, known as Sky Dancers. Likewise, the mythology also states that Guru Rimpoche, the founder of Tibetan-Buddhism once meditated here while he was on his way to Tibet.

The temple also features the Chenrezig statue and the Padmasambhava Statue in Muktinath which Buddhists believe are the two most sacred objects present. Nearby the temple, there is also a natural ever-burning fire in the temple of Jwala-Mai which carries an immense religious significance in Buddhism.

How to get to Muktinath?

If you do not have adequate time or want to travel in absolute luxury, you can opt for the Muktinath helicopter tours! These are usually completed within a day, starting early and finishing by noontime. Several domestic airlines and tour agencies conduct the Muktinath Helicopter Tour. Though they might be a bit expensive, they allow you to travel in absolute comfort! Helicopter tours usually cost you around 1400 USD with a maximum limit of 5 people.

Several jeeps and local buses are available from Pokhara and Jomsom which can take you up to the foot of Muktinath. The journey from Pokhara is a little longer and might take about 6-7 hours. The prices usually vary according to the seasons but averagely cost you around 12 to 15 USD. Also, you might have to switch buses and jeeps as there are seldom vehicles that travel all the way from Pokhara to Muktinath.

Travelers mostly visit the temple via trekking. Two different trekking routes lead to Muktinath. One is the traditional Annapurna Circuit Route in which you descend from Thorung La Pass at 5,416 down to Muktinath at 3,800m and stay overnight. Similarly, the other way is from Jomsom, where you can pass through the settlements of Eklabhatti and Kagbeni towards Muktinath. Several tour agencies also conduct Muktinath treks for the sole purpose of visiting the holy shrine.

Things To Do While In Muktinath

Take a shower in the well-famed 108 showers

The temple features 108 showers which locals believe cleanses a person of all their sins and wrongdoings. It also helps them to achieve absolute salvation. When you are in Muktinath, be sure to take a dip in these showers. You can find a lot of devotees taking a quick shower even during the freezing conditions!

Nearby Muktinath, there is a Jwala Mai temple which features an ever-burning natural fire. The fire burns eternally due to the presence of natural gas buried underground. The temple carries a huge religious significance amongst Buddhist devotees.

Visit the Kali Gandaki River and look for Shaligrams

Like the Muktinath temple, the river of Kali Gandaki is also a sacred site. If you’re lucky, you can even find old-age fossils along the banks of the river. On another note, you can also buy these fossils if you fail to find one yourself. The black stone or ‘Shaligram’ is the most valuable thing you can find in the banks of the river and carries a high religious significance!

Climate and Temperatures of Muktinath

Due to its high altitude and proximity to the Himalayas, the weather here is ever changing and quite unpredictable. Also if you happen to travel during the unfavorable seasons, snowfall and slippery trails can cause significant risks. Thus always be sure to visit during the favorable seasons that generally are the autumn and the spring season.

Talking about the temperatures, during summer they fluctuate between a maximum of 22 to 24 degrees Celsius and a minimum 12 to 16 Degree Celsius. However, during the winter the maximum temperature will be 6 to 10 degrees Celsius, and the minimum hovers between 0 to -6 degrees Celsius.

Whether you’re an avid traveler or not, Muktinath is one of the places in Nepal that you should visit! The site offers fantastic views alongside sacred heritages soaked with rich cultural history. On the other hand, if you’re a religious believer, then this place can be your perfect gateway for achieving nirvana!