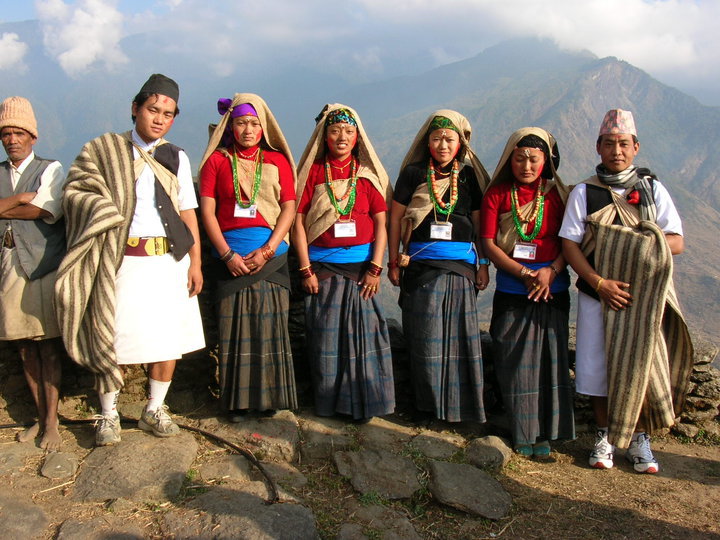 Hinduism and Buddhism constitute two major religions of Nepal . A remarkable feature of Nepal is the religious homogeneity that exists, particularly between the Hindu and Buddhist communities. Apart from the Hindus and Buddhists, Muslim from the third largest religious group. The exquisite medieval Art & Architecture of the Kathmandu Valley vividly reflect the artistic ingenuity and the religious tradition of the people.

Nepal is a melting pot of many races and tribes. With the population of twenty-two million, Nepal is an assortment of races and tribes, living in different regions, following different costumes and speaking different languages. Nepalese live under diverse environmental conditions from the low, nearly sea level plains at the border of India, northward through the middle hills and up to the flanks of the great Himalayan range where there are settlements at altitude of up to 4,800m. Farming practices are therefore equally diverse along with life styles and social customs

Major Groups
The early settlement of Nepal was accomplished by large-scale emigrations of Mongoloid groups from Tibet and of Indo-Aryan peoples from northern India. Nepalese of Indo-Aryan ancestry constitutes the great majority of the total population. Tibeto-Nepalese peoples form a significant minority of the country’s population. Nepali, a derivative of Sanskrit, is the official language; Newari, a language of the Tibeto-Burman family, and numerous other languages are spoken. About 90% of the population is Hindu, and the remaining Buddhist.

Sherpas
The best known of the high mountain people are the Sherpas who inhabit the central and eastern regions of Nepal. The Sherpas have easy access to Bhot (Tibet) for trade and social intercourse and therefore Tibetan influence on their culture and civilization remains distinct.

The Rais, Limbus, Tamangs, Magars, Sunwars, Jirels, Gurungs, Thakalis, and Chepangs are other Tibeto-Burman speaking Mongoloid people found living in the middle hills. Each have their own distinct social and cultural patterns.

Lowland Terai People
The Dun valleys and the lowland Terai are inhabited by people such as the Brahmins, Rajputs, Tharus, Danwars, Majhis, Darais, Rajbansis, Statars, Dhimals and Dhangars. Though Nepal is a veritable mosaic of dozens of ethnic groups, they are bound together by their loyalty to the institution of monarchy, and by the ideas of peaceful coexistence and religious tolerance to form one unified nation.

With its diverse ethnic groups and traditional beliefs, Nepal has numerous cultural practices that may appear unusual to a person on his/her first visit to the country However, to enjoy your stay in the remarkable country of white Himalayas and sparkling rivers it is important to take into consideration the different cultural aspects of the country. Here is a list of things, which may be helpful to you.