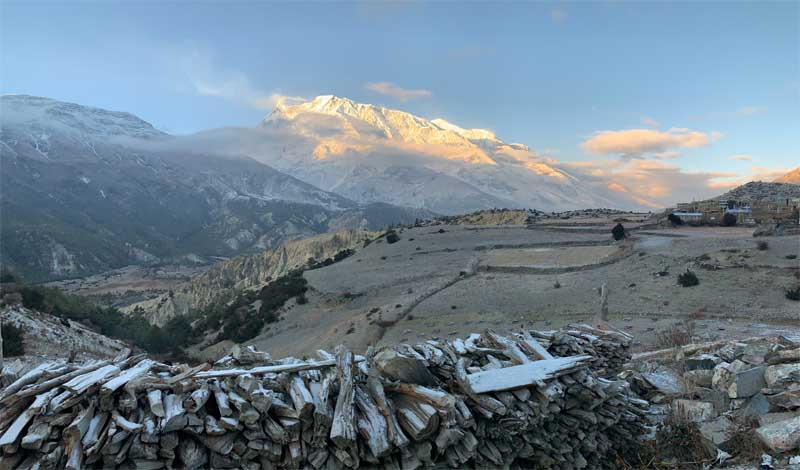 Manang (3518 meters) is a beautiful village located at the edge of the cliffs in the north region of the Annapurna Range. The arid landscapes of Manang remind you of a barren desert. The culture and lifestyle of the local Manangi people, on the other hand, is vibrant and lively.

Manang is very  popular for   short trekking options in Nepal. The  Manang Valley is simply the paradise for trekking, tourist destination, The Manang trek offers you incredible  Beauty of natural ,rich culture  and spectacular views of Annapurna ranges.

Manang is called the “crown jewel” of the famous Annapurna Circuit Trek. You can observe the magnificent views of the snow-capped mountains like Mt. Dhaulagiri (8,167 m), Mt. Manaslu (8,163 m), Mt. Annapurna (8,091 m), and others from Manang. The view of the unique Mt. Machhapuchhre (6,993 m) or the “fishtail mountain” is also spectacular.

The gorgeous village of Manang is one of the most remote villages of Nepal. Trekkers trekking the Annapurna circuit usually acclimatize at this tranquil place. You can also take various side trips around the Manang Village. You can explore the pristine Gangapurna Lake and Glacier or go on a hike to Braga.

Manang is located at an altitude of 3,519 metres. It has a tiny population of 6,527 people with a population density of only three persons per square kilometre. Geographically, Manang lies in the broad valley of the Marshyangdi River towards the north of the Annapurna mountain range.

A trail linking between Manang and the Annapurna Conservation Area was completed in February 2011. This trail has brought a lot of development and prosperity in the region, and the locals have benefited a lot.

If you are doing the Annapurna Circuit, Manang is a popular acclimatization point before attempting the Thorong La Pass (5415 metres).

How Can You Go to Manang?

You need to move along a winding, and treacherous roads to reach Manang. These roads once only possible through horses or on foot can be now traversed by jeeps and motorbikes. These roads provided an added value of adventure for true adventure seekers.

Manangis speak Manangba or Manange, which is one of the 400 dialects of the Sino-Tibetan family spoken all over the Asian continent. However, the language is on the brink of extinction because of the rapid migration of the younger generation of Manangis into the cities.

There is no written script of the language which makes it difficult to protect in the long run. The language is linguistically similar to Tamang, Gurung, and Thakali language. Locals do speak Nepali as their second language.

The accommodation facilities in Manang can vary according to preferences and budgets. There are various lodges, guest houses available in the village. There are few homestays available to that provides you with an opportunity to experience the lifestyle of the locals.

One of the most famous Tibetan delicacies found in Manang is “Thukpa” which is a brothy noodle soup and “Tsampa”, which is a roasted barley flour mixed with butter and sugar. Besides that, you can also delve on the delicious yak steak and yak momos.

You must also try the smoky “ghiu chia” in the cold mornings and night. Dal Bhat is a typical Nepali delicacy that consists of rice, dal (pulses), lentils, vegetables, pickles, and meat. Some Guesthouse also provides western cuisines like pizza, burgers, pasta and bakery items and cakes.

Manangis majorly comprises of Gurung and Ghale people. During the harsh winters, they would locate to the southern parts of the country. They base their livelihoods on seasonal agriculture and tourism. The tourism industry is also dependent on the weather.

The Manang district gets divided into Lower and Upper Manang. There are Buddhist prayer flags and other totems of the ancient Bon religion in almost every household. The upper part of Manang is mainly buddhist. The region has hundreds of chortens and buddhist flags.

According to popular belief, the chortens constructed by Buddhist lamas protect them from natural calamities. The lower mustang has majority of Gurung community. Nepali is widely spoken, and Hindu festivals like Dashain and Tihar are also celebrated. There are numerous gumbas/ gompas in the region where Buddhist lamas reside.

These lamas perform various rituals and ceremonies. One of the unique rituals is that if a person dies during the crop season of growing crops, the lamas cut the body into pieces and feed them to the vultures as a part of the ceremony.

However, in recent times these practices are getting replaced by cremations. The ancient Bon religion is still in practice, and people also worship nature as they believe that worshipping stones, trees, winds, storms can avert natural calamities.

The spectacular Culture Museum lies on the main road near the Himalayan Rescue Association (HRA). This museum is an opportunity to explore the culture and heritage of the area.

The museum is also a historical home and you can also visit the HRA’s office where they brief you about acute mountain sickness and how to cope with it.

If you seek some more adventure, then you should visit the nearby village of Braga. Braga has one of the oldest monasteries in the area.

The picturesque village has red and white paints and Buddhist flags hovering all around. The view from the hill is stunning. You can take some great photos of the entire valley from the view point.

The valley comes alive during the Losar celebrations. Losar is a festival of Tibetan New Year in February or March. You can also find men practicing and archery and horse races, and competing in the annual competitions between April and May.

The autumn months of September To November is also quite favourable as the climate is soothing. The perfect trekking temperatures also makes for a great trek.